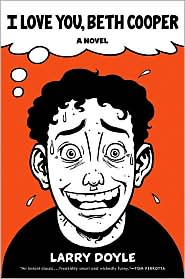 When I read today that Larry Doyle’s book I Love You, Beth Cooper was being made into a movie I felt like the world had finally started to make some sense. Because if ever there was a book destined to moviedom, it’s this one. In fact, the whole thing reads more like a screenplay than it does a novel. Of course it was written by Larry Doyle a former Simpson’s writer and after reading Things I Learned While I Was Skipping English 101, I am starting to develop a Crackpot Theory about tv writers cum novelists. But it’s still in the brewing stages.

Anyway, the book is about Denis Cooverman, the nerdy, short, valedictorian of his high school class who is in love with Beth Cooper the popular, pretty head cheerleader (soon to be portrayed on the silver screen by Hayden Panettiere). On the night of their graduation, during his commencement speech Denis tells Beth and the school and all their families that he loves her, hilarity ensues.

Yeah. I know you are stunned by the originality and brilliance of these characters and situation already. It doesn’t get much better. Cooper and her coterie of friends end up at Denis’ house for his graduation party, and then her meathead soldier boyfriend comes and, well, more slapstick hilarity ensues. The book follows Denis, his nerdy best friend, Rich, and the three pretty popular girls throughout the night as they hide from Beth’s sociopath boyfriend and his two army buddies.

I had a bit of trouble with the utter clichedness of the story. Really, it’s like “Breakfast Club” meets “Weird Science” meets “Porky’s” meets well, just about every other 80s teen flick you’ve ever seen. But, just like all those 80s teen flicks, the book is really a lot of mindless fun. I even found myself barking outloud with laughter at a few of Denis’ observations and conversations. Even though I am being a little bitchy about the triteness of the situation and characters, I gotta say I read the book in two days. Why? Because it was fun. Plus, I really liked that the start of each chapter includes a drawing of how Denis looks at the moment, and includes a quote from many of the movies I listed above. At least Doyle is fully aware of the fact that he’s not blazing a literary trail here.

And, now that I think about it, for as cliche as Denis might seem, he feels like a real, sincere person complete with inner-conflicts, wants, and desires. Denis is a great, great character and the force of his nerdy yet charming personality is what will get you through the rough spots when you want to roll your eyes so hard they pop out of your head because yeah, yeah you’ve seen this before.