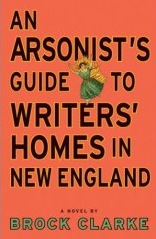 I just counted and I’ve read (or attempted to read, some of the books I chose were so bad I stopped [Fifth Business and that awful, horrible fucking Freebird book]) forty-one books so far this year. I can say with absolute conviction that thus far my favorite novel of the year is Brock Clarke’s An Arsonist’s Guide to Writers’ Homes in New England.

The fact that when I saw Brock Clarke read a month ago he mentioned how he was so excited to be in Minneapolis because of The Replacements and that he spent the day singing “Skyway” did not influence my decision at all. Honest. But like I said over on the Paul Westerberg.net in reference to Joshua Furst’s Sabotage Cafe (probably my second favorite novel of the year so far), I can’t help but support and promote authors with such excellent taste in music. However, Clarke has more then just good taste in music. His writing kicks some serious ass.

Briefly, the book is about Sam Pulsifer a bumbling kind of guy who accidentally burns down Emily Dickinson’s house and kills two people when he’s 17. After spending ten years in jail, Sam marries and has children and never reveals his secret, of course it all comes back to haunt him. Sam tells us his story about how the past comes back to haunt him and essentially writes his future. Along the way he takes potshots at the anonymity of suburbia, bookstores, book clubs, memoirs, and those American writers we hold in such high esteem.

The thing that I love the most about An Arsonist’s Guide to Writers’ Homes in New England is that it happens to be funny to the point of absurd yet retains this sort of emotional honesty that is ultimately quite moving. The fact that Clarke has pulled this off so well is kind of stunning.

I dare you to look at your bookshelf and try to find six books that manage to be funny and moving at the same time. I bet you can’t find them. It’s hard to do both and it takes a writer with amazing skill to manage it.

Much like King Dork last year, this is one of those books that I tell everyone I know to read and if they don’t like it, I will buy it from them and give it to a home that will love it.

If you still need some convincing, read an excerpt or Clarke’s Largehearted Boy Book Notes Essay.