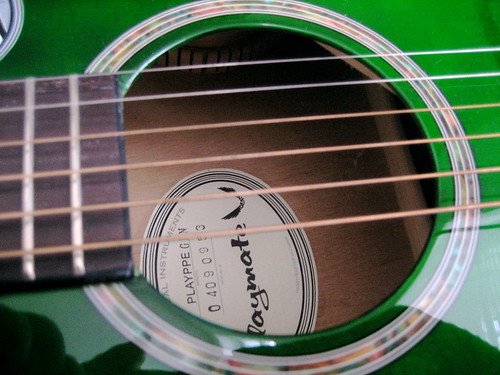 You know how people always post pictures of their dogs and kids? I’m gonna be like those people and post pictures of my guitar, Lucinda, all the time. It’ll be, “Oh here’s Lucinda in the comfy green chair.” “Here’s Lucinda sitting on my bed.” “Here’s Lucinda and Kathleen Turner Overdrive riding around in Ruby.” I figure if you’re gonna act out your unfulfilled mothering desire by naming the inanimate objects in your life, you might as well just go totally batshit insane, no?

In other news, I am still totally in love with the guitar. I am not, however, totally in love with learning how to play the guitar. It’s not even that I’ve grown bored or frustrated with learning the fundamentals. Generally, that’s what kills most of my new hobbies. I learn just the very littlest bit and then get bored with trying to learn anything beyond that. Which is why I can only crochet stripes. I got bored half-way through Learn to Crochet in 24 Hours, and settled for stripes.

But with Lu, it’s different. I want to learn more than just scales. I want to pay actual songs, and not just “When the Saints Go Marching In.” (See, I took piano lessons when I was a sophomore in college and never made it past When the Saints go Marching In. I was pretty good at it. Just ask Sister #2 or the Stink.)

The problem here is not that my impatience is impeding my progress. It’s that my damn fingers are so soft and tender. After about fifteen minutes of playing, my fingers hurt so bad I want to cry. Allegedly, you will build up some supersexxy fingertip calluses (and if that doesn’t make the boys come a runnin’ ain’t nothin’ gonna) over time. And by time, I guess they mean more than four days.

Tonight I realized that I’d probably get more real practice time in if I didn’t spend at least six of my fifteen pain-free minutes just strumming wildly while singing random songs where I try to work the names Lu, Lucinda, or Jodi into the lyrics.

(Visited 34 times, 1 visits today)
make your own kind of music