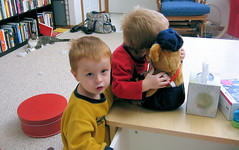 now i have photographic evidence of how much Nolie loves the Beatles Singing Bear. while i babysat yesterday we must have played that bear about 320,918 times. both Nolie and Cade are getting pretty good at singing along.

i had to babysit yesterday because of the awful, no-good, very bad friday. friday, which started out splendidly with some A Different World followed by lunch with Webboy, Jess (and her little daughter Laney). But then i had to leave for the bowling alley, and ruby decided that she had had enough and wouldn’t start. with a dead ruby, i had to use Sister #4’s hideous grocery getter (i never thought i would miss the short bus, but i do, i liked it better then the green saturn vue she replaced it with).

and then because i was already crabby with concern for ruby when i got to the bowling alley, bowling didn’t go so swell. i burned my arm on the pizza oven, Boobs LaRue was there, and i got to learn more about absolutely everyone’s sex life than i really wanted to.

but then yesterday tony came and fixed ruby (she needed a new battery) and i got to hang with the fabulous becker boys. so i guess life eventually balances itself out.

@Anneflo He is, mostly so you don’t want to murder him all the time for being so annoying.

@jessikate I’m a crocheter and people tell me the same thing. Ugh. No. I don’t want to turn something I do for fun into a job.