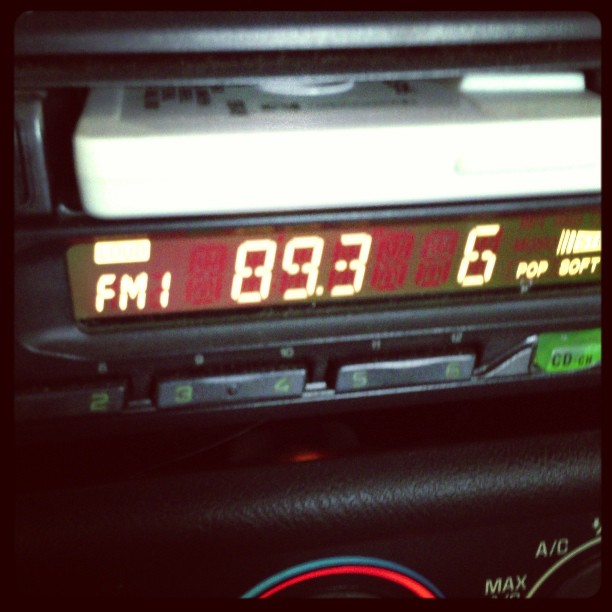 FFJ & I sat on the bench outside the dog grooming place next to the Thai food place that I love. The sun was bright and neither of us were ready to get back to real life. We talked about men, drinking, Arrested Development, and if it means I’m a cougar now because I’d rather bone Michael Cera instead of Jason Bateman.

We also spent a lot of time talking about what a Fucks-A-Lot Care Bear would look like. I wanted it to be the color of cigarette ashes and regret, with two text messages bubbles one with a ? and the other a !. She had other ideas that involved guyliner, pierced tails, and a golden key. We both decided it needed more thought.

Eventually I had to kill the good time because I have a huge editing project due tomorrow and if I can get most of it done today I can spend tomorrow writing.

FFJ lives a few blocks away from the Thai place, and I have to drive past her house to go home.

We climbed into Ruby, my 1999 Chevrolet S-10 truck. Rube’s was baking in the heat with the windows up so she was roughly 183 degrees inside. I immediately rolled down my window, but FFJ had to clear about three weeks of junk mail off her seat. She sat down, closed her door, and then looked miserable.

“You can roll down your window,” I said.
She waved her hand in the general direction of the door. “How?”
“It’s right . . .” I started.
“Oh,” she said discovering the window crank by her knee. “You gotta crank it.”
“Yeah, it’s old fashioned.”

With the window rolled down and the cool breeze flowing she turned to discover a tape in Ruby’s tape deck.

“Is this for real?” She asked, plucking the cassette from the radio’s gaping maw.
“Yeah.”
“I didn’t think you had an actual tape deck. I’d have given you all my old tapes.”
FFJ balanced the tape on her knee and took a picture. “Fast Times at Ridgemont High. Hell yes.”

The picture taken she popped the cassette all the way in. I rewound it for a few seconds, and then we were treated to the opening strains of Jackson Browne’s “Somebody’s Baby.” As I reversed out of my parking spot we burst into song. Well, just look at that girl with the lights coming up in her eyes.

“This feels like summer to me,” I shouted over Jackson.
“We need to drive around the lakes with a tape blaring,” She said.
We sang as I turned onto her street.
“This summer,” she said as I pulled into her driveway. “We’re getting tapes, driving around the lakes, and I’m bringing cigarettes.”

I laughed all the way home, while the open windows blew my hair in my face, and I rewound that song five times, singing every single word at the top of my lungs each time.