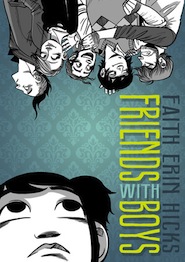 I’ve fallen off the graphic novel bandwagon. Hard. It kind of hurts. I miss graphic novels, but I’m sick of all the dudeness in the graphical realm. That’s putting it mildly. It’s the kind of sick that makes my stomach fill with acid and my cheeks flush red with anger. Why is it so damn hard to find graphic novels written by women. WHY? If you have suggestions, I will take them greedily and eagerly.

So while wandering down desolation row, I discovered Friends With Boys by Faith Erin Hicks, and immediately set about getting my greedy little hands on it.

Friends With Boys is a sweet charmer of a coming-of-age story set in small-town Canada. Maggie McKay is the youngest of four, the only daughter, and about to start her first day of high school. Starting high school is a daunting task for anyone, but it’s extra nerve-wracking for Maggie whose been home-schooled her whole life, and whose mother has recently left the family.

Also, Maggie is haunted by the widow of a 19th century sea captain.

It seems like a lot for one book, but Hicks handles it all quite well. The ghost story sort of fades to the back for a little while with the intricacies of navigating High School and friend-making taking center stage. While the ground Friends With Boys covers is well-trod — bullying, jocks vs. drama kids, loners looking for friends. But the art is really charming and fun and there are moments that are quite delightful, like when Maggie asks her older brother, Daniel, if he’s popular.

Maggie eventually makes friends with Lucy, a lonely outsider, and her brother Alistair, who has some unresolved drama with Daniel. There’s also some sub-plot going on with the void growing between twins, Lloyd and Zander, and how Maggie feels responsible for her mom’s estrangement.

If anything the book tries to cover too much at once: the ghost, the friend-making, the family stuff, which are all interesting stories, but kind of get short shrift. They could have used some space to breathe, and more time to develop each of the characters’ stories. This would have made a nice series of books ala Scott Pilgrim. Instead, they get all crammed together and feel a little jumbled at times.

Eventually the ghost story takes center stage with Maggie and her friends trying to but the ghost to rest. Some teen hijinks ensue that involve Maggie’s police-chief dad and leaving her friends stranded, but it all works out in the end. Almost too well. It feels a little forced, which is a shame. I’d have loved another two or three books with these characters. Maybe that can still happen. Regardless, Friends With Boys is a nice way to spend a few hours.