The Giant’s House is one of the books I’m re-reading as part of my Re-evaluating Personal Artifacts project. This is Part I of two or three. I don’t know yet how much I have to say about this book.

It was the summer of 1996. Six months out of college, I was living with my parents and working at a gas station across the street from their house. I drove a beat-up 1979 Chrysler Newport which was nearing the 300,000 mile mark. All my college friends were somewhere else, I was lonely and adrift, getting all my cultural input from City Pages, Rev-105, Spin, and late-night, long-distance phone calls from my friends.

This was pre-Internet and cellphone ubiquity. It was lonely as fuck.

Since I was raking in a cool $5.55 an hour at the gas station, I thought I was loaded and proceeded to spend all my money on books and CDs. Musically, I was on a good path. Rev-105 was probably the most influential entity in the development of my musical taste, with Jim Walsh coming in a close second.

But literarily? I was on my own and it was a scary time. My early reading years were mostly self-directed and consisted for trashy grocery-store lit and Sweet Valley High. College reading was mostly dictated by professors, and the few books I read for pleasure were either recommendations gleaned from music magazines or books I’d heard of.

So there I was in 1996 with ample free time (working third shift in a small, not particularly busy gas station left a lot of time for sitting behind the counter and reading), lots of expendable income, and only my instinct to guide me. It was during this time I set out to read all the novels that had won the Pulitzer Prize for fiction. About twelve or thirteen novels into that daunting task I ran into A Summons to Memphis and abandoned the project. I think ‘Summons’ has the distinct honor of being the very first book I ever quit, oh wait, no, that distinction goes to Anne Rice’s Interview with a Vampire.

Directionless once again, I’d haunt the stacks of the Barnes & Noble in Burnsville, back when it was across the street from where it is now in a strip mall sandwiched between Office Max and Toys R Us. I confess I spent a lot of money on really crappy chicklit before it was called chicklit and Oprah’s Bookclub Books. But I also read everything Jeanette Winterson had published up to that point, all of John Irving’s catalog, and even some John Updike (because I thought he was John Irving).

I’d go to Barnes & Noble every week after I got paid and load up on books — three, four, sometimes five at a time. It really were halcyon days. It was during one of these weekly trips that I stumbled upon Elizabeth McCracken’s The Giant’s House. 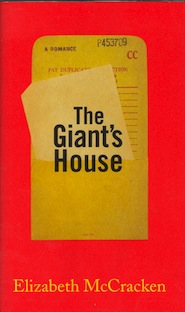 The bright red cover with the library pocket caught my eye, so did the word giant. Having finally reached my full height of 6’5″ at 23 I was pretty sure I qualified as a giant. But that’s not what even sealed the deal for me on this book. No, what sealed the deal, which I will reveal in the next sentence, is the most ridiculous and shallow reason to probably ever read a book.

I plucked The Giant’s House off that Barnes & Noble shelf because Elizabeth McCracken’s author photo reminded me of Janeane Garofalo. Yes, that’s the embarrassing and true story of how this book, the one I recommend to every single person who asks me for a good book to read, the book that is easily one of my top-five favorite books of all time, came into my life. Janeane Garofalo.

This should tell you two things about me. I really was utterly directionless in 1996 and I loved the shit out of Janeane.

Later I will tell you why The Giant’s House is such an important book and how it holds up to the Re-evaluation of Personal Artifacts.