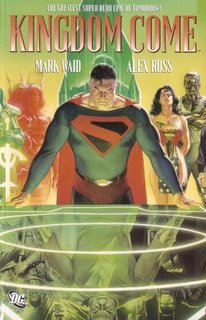 It’s been about two years since R&RBC picked a book so shitty I couldn’t finish it (the unreadable The Boy Who Cried Freebird), and now comes Kingdom Come.

Graphic Novels are usually quick reads filled with lots of pretty pictures to get you through the rough spots. Generally, you’re nearly finished with the book before you start to smell shit. So really it takes a special brand of shittiness to make you quit half-way through. Kingdom Come has that extra special brand of shittiness. It’s like super, new-improved awfulness, because this is a Superman book that I couldn’t finish. Me. Superman.

It kind of breaks my heart.

I’m not exactly sure what the fuck is going on in Kingdom Come even though I read the first chapter twice in an attempt to try to better anchor myself in whatever wacky DC Universe this book takes place in. From what I can tell the Justice League retired after Superman quit because The Joker killed Lois Lane and some sort of metahumans came and started bossing everyone around. And there’s an old guy traveling through the time-space continuum with a sort of angel. The old guy has visions that involve Armageddon and he spends a lot of time quoting bible verse.

Something happens and Magog (I think) splits The Atom (or Particle Man or whoever it is) and turns the Midwest into a nuclear wasteland. This brings Supes and his pals out of retirement, only they’re all old and saggy now. And Batman is evil. Or at least he teams up with Lex Luthor, so I think Batman is evil.

Because I’m not an avid follower of superhero comics and I don’t always know the history, I’m willing to spend a little time in each book being confused and waiting to get my footing in the story. It’s the danger of superhero comics and genre fiction, they rely a lot on the conventions of their genre and make the assumption that a reader is familiar with those conventions.

But 140 pages should be more than enough time to figure things out. When I realized I still had no idea what the hell was going on and that I didn’t care what was going on, I quit. Sorry Supes, this book is the suck.