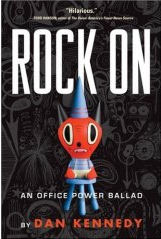 I’ve noticed an alarming trend in the want ads lately. It seems “rock star” is the adjective du jour when describing the employees that companies want to hire. Even Hell, Inc. is looking for “rock stars” now that they got rid of all of us mid-tempo balladeers.

It’s an interesting choice of words, and maybe only a nerdy copywriter would think so. When I think rock star I think moody, substance-user/abuser, works odd hours, doesn’t practice good hygiene or moral judgment. I fit that bill. But when I got into an interview I try to hide that. I don’t mention it on my resume. Especially because the substance I choose to abuse is Dawson’s Creek.

These aren’t exactly the traits that most corporate HR borgs look for in an employee. So exactly what is “rock star” supposed to mean in this context? I can’t figure it out.

Anyway, this all reminds me of a book I just finished called Rock On: An Office Power Ballad by Dan Kennedy. This is a memoir of Kennedy’s 18 or so months working at a marketing/creative wonk at Atlantic Records.

Rock and Roll. Owww! Right? Wrong. What I loved the most about Kennedy’s book is that like most everyone on the planet he thought working for a record label would be the bomb digs, but as he finds out (and us too, as we read), it’s exactly like working in the marketing department of every other company on the planet. From the inane meetings, to the marketing speak, to the absolutely idiotic corporate hierarchy, everything is the same. Seriously.

If I did a find and replace on this book, and swapped out record for software. I could slap my name on the cover and call it mine — because the experience is so true and universal.

I am surprised by how much I enjoyed this book. It was awesome. Not only I could identify immediately with Kennedy’s situation (including the inevitable layoff), but the book is riddled with Replacements’ references. Clearly, this book was meant for me.

The surprise comes because I still have a bad taste in my mouth from reading Joshua Ferris’ super-shitty Then We Came to the End. Both books deal with the same subject matter, marketing/creative people in career peril. But where Ferris’ book is all group-think, first person plural bullshit, Kennedy’s book is a hilarious, personal take on not just the record industry (in its waning years) but corporate America.

And I cannot emphasize enough how fucking funny Rock On is. I laughed out loud so many times that I started marking passages so I could go back and read them again.

On Ice-T:
What if the lights come on and Ice-T sees me standing here crying? He will kill me. Have you heard this guy’s songs? Jesus, he probably actually has a song about killing guys that look like they’re about to cry over their own commercial.

On trying to get Web/IT people to do anything:
Angry New Media Chick: Impossible! Back-end architecture! Cookies and lasers! Server-side technology!
LM will join in too: Yeah! What she said! Plus, I mean, I would have to see if what you’re asking for is even feasible!

The book is so funny that I want everyone to read it right now, so we can go back and forth and riff on our favorite parts. It is easily my favorite memoir since Love is a Mix Tape, and you all remember how much I loved that one, right?