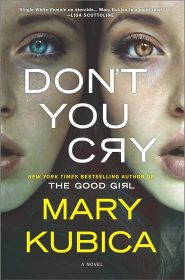 Don’t You Cry by Mary Kubica should have had the distinction of being the first book I quit in 2017, and yet somehow I finished it, though I’m not entirely sure why.

I guess, maybe, I wanted to see if I was right about this wooden mystery populated by unbelievable-as-humans characters. I was right. And really, you shouldn’t bother. Unless, of course, you want to read about a couple of martyrs and a vapid young woman.

Quinn Collins lives in the Andersonville neighborhood of Chicago with her roommate, who she calls St. Esther. One Saturday, after Quinn has kicked out the dude she brought home the night before, she discovers Esther is missing. It feels a little strange, this not being where she’s supposed to be. A window is open in her bedroom and Esther had skipped the night before’s bar-hopping because she was sick.

Just across the lake, over in Michigan, eighteen-year-old Alex is bussing tables at the only diner in town when a mysterious woman orders up some breakfast and instantly enchants him.

The narrative bounces back and forth between Quinn trying to find out what happened to Esther and Alex trying to figure out just what the deal is with the woman he has dubbed Pearl, who has taken up residence in the dilapidated, not-fit-for-occupancy house across the street from where he lives.

My biggest problem with this book wasn’t even the pretty easy-to-figure out mystery, because sometimes that happens. What bothered me, was the character of Alex. Ugh. He was the worst.

Alex was an eighteen-year-old kid who lived alone with his unemployed, alcoholic father. His mother had left them when Alex was a young kid because she didn’t want to be a mom. And so Alex was kind of left to fend for himself and apparently got a job working as a busboy at twelve (?!) to support he and his father. Apparently in Michigan you can live off the whatever a twelve-year-old busboy can make. And apparently nobody will call in child protection about a twelve-year-old taking care of his alcoholic father and apparently this twelve-year-old will be so smart that he’ll get a full-ride academic scholarship to some mystery university but will not be smart enough to take it because: dad?

Riiiighhhttt. All of that sounds totally plausible.

And it’s one of those things where if one part of the book is so flawed then the rest of it just gets tainted by that unbelievable bullshit. And so it is with Don’t You Cry.