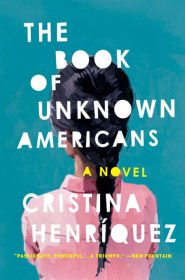 There is a scene in the beginning of Cristina Henriquez’s The Book of Unknown Americans that shook me. It’s one of those scenes that makes you pause and think about what it must be like to come to America and try to operate in a country where you don’t know the language or the customs. It’s one of those scenes that smacks you in the face with your white, American-born privilege. This is a good thing.

In the scene Alma and Arturo Rivera have just arrived in Delaware from Mexico with their fifteen-year-old daughter, Maribel. It was a journey they took in the back of a pickup truck picking up odds and ends found on curbs along the way to furnish their new apartment. Their first day in America they wake hungry, and set out on foot in search of a store where they can buy some food. They happen upon a gas station where the pickings are slim, but there are eggs, some kind of crap that the American’s call salsa, and bread. They pick up a few items and head to cashier to pay. They hand over the money, $20, I think and there is a lot of confusion. The Riveras can’t understand what anyone is saying, everyone around them is annoyed and making mean faces, the cashier is staring at them dumbly, and there’s a scummy teen boy creeping on Maribel.

Alma and Arturo begin to bicker. She doesn’t understand what is expected of them, he’s waiting for his change. It is awkward and frustrating and you can feel the Rivera’s embarrassment and bewilderment. Turns out their meager collection of groceries is more than $20 and they are dumbfounded at the expense.

It is a great, great scene in a book that wavers around pretty good as a whole.

The Riveras came to the US because Maribel has suffered a traumatic brain injury and the doctors in Mexico said she would do well in a school in Delaware. So they give up their house, Arturo’s job, and land in an apartment building populated with other Hispanic people who have come to the United States for a variety of reasons. You learn these reasons in little snippets throughout the book. However, the main narrative swings between Alma Rivera and Mayor Toro, the 16-year-old boy who lives downstairs with his parents and has a crush on Maribel.

Here’s the thing with this book. I enjoyed the voices of all the characters — Alma, Mayor, every one of the neighbors (who tell their backstories in alternating chapters between the main narrative), but I did not like the over-arching plot. It’s super melodramatic (teens in love, parents who want to keep them apart) and the foreshadowing is about as subtle as a jackhammer. It’s FORESHADOWING and might as well have the “duh-dun-duh” music before it.

This is a tough one. The characters are great and the plot is garbage, which only detracted from my enjoyment a little. The story ends in a burst of tragedy and melodrama, which I think is supposed to have some emotional impact but because I saw it coming from about 100 miles away it made me a little shruggy.

However, I liked the backstories of all the apartment-dwellers so much that the stupid plot was only a minor annoyance because the cast of the book was so good.