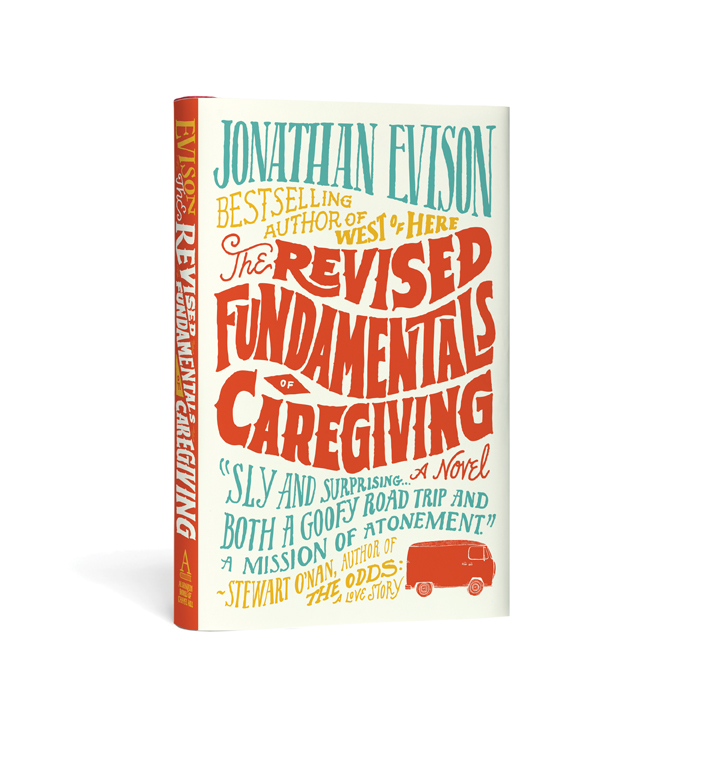 Benjamin Benjamin is not a likable guy. Even when you factor in the pity you feel for him over the loss of his house, wife, and children, he doesn’t come across very well. Ben’s kind of a self-involved, misogynistic jerk.

After his life went kablooey, stay-at-home-dad Ben took a class called The Fundamentals of Caregiving and becomes a home health aide for nineteen-year-old Trevor, who is suffering from Duchenne muscular dystrophy, a disease that leaves him twisted like a pretzel, wheelchair bound, and kind of a jerk too.

These two unlikable jerks form an unlikely friendship in Jonathan Evison’s The Revised Fundamentals of Caregiving and somehow create a story that is funny and, damn the cliche, heartwarming.

Against all logic, Ben and Trevor set out on a roadtrip to visit Trev’s estranged father. The duo plan to visit wacky roadside attractions and generally run away from their hometown troubles. However, once they hit the road things don’t go as planned.

They end up picking up a gaggle of various loser-types, a teenaged runaway named Dot, a super pregnant space cadet named Peaches, and her sometimes convict, get-rich-quick dreaming boyfriend, Elton. Also, the crew is being tailed by a menacing Buick Skylark that Ben’s sure contains someone sent by his wants-to-be-ex-wife.

I’m not sure how or why this one works so well. There were times, pre-roadtrip where I thought I’d close the book forever if Trevor and Ben spent one more paragraph seeing a woman as nothing more than a sex object, if Ben described one more woman by some aspect of her appearance, but I stuck with it. Somehow on the road to Salt Lake City, as Ben flashes back to the events that led up to the death of his children and the loss of life as he knew it I began to have sympathy for him.

Perhaps it was the way he so wistfully remembered the roadtrip he took with his very-pregnant wife and young daughter, a trip rife with small disasters (these flashbacks are so beautifully, wonderfully written you could almost see that misty, cloudy quality flashbacks have in movies). Perhaps it was the way he so selflessly looked after Trevor or cared about Peaches. Perhaps it’s because as the roadtrip unspools, Ben slowly begins to forgive himself for the mess he made of his life and as he does, so do readers.

I’m not sure how or why it all works so well, but it does. The roadtrip trope is well-travelled, and yet Evison has managed to make it feel fun and unexpected. This is the kind of book that when I finished it, I closed the cover and thought to myself, oh, that was so sweet.