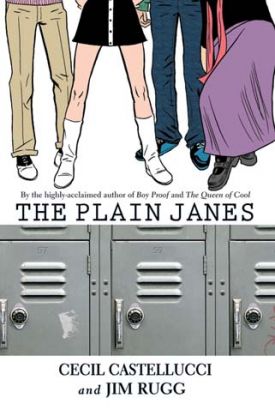 I’m going go right ahead and put Jane Beckles right up on a pedestal next to Ramona Flowers & Zero Hopeless-Savage. These pedestals are reserved for kickass, young, female characters from graphic novels.

After I complained about how difficult it is to find graphic novels written by women, LeAnn called on her posse of librarian superheroes and came up with an excellent list. From that list I plucked out The Plain Janes b Cecil Castellucci and Jim Rugg, and while I was at it I grabbed the sequel Janes in Love.

I will now commence to blather semi-coherently about all the many, many things I loved about these two graphic novels.

So Jane Beckles is a teen girl in a fictional New York City type place called Metro City. One day she’s happily walking down the sidewalk when a bomb planted in a garbage can explodes. It’s small-scale, fictional 9/11-type terrorist attack that causes much panic and paranoia throughout the city. Because Jane was so close to the devastation, her parents lose their shit and move the family and their hair salon to a small town hours away from the big city.

Jane’s not too thrilled to be away from the art and the hustle and the bustle of the city. And she’s really not thrilled to have to leave John Doe, a victim of the bombing who has lapsed into a coma, and whose identity is unknown.

The bombing changes Jane and once she lands in the bucolic suburbs called Kent Waters she is hell-bent on changing her ways and making the world a better place. At Buzz Aldrin High she eschews the popular kids and hooks up with a trio of misfits: Jane, Jayne, and Polly Jane. Yeah, I know. But really, it’s kind of charming.

Despite their lack of interest in her, Jane weasels herself into the group and even motivates them to form a secret club, P.L.A.I.N. — People Loving Art In Neighborhoods. The P.L.A.I.N Janes sneak around and put up art exhibits in public spaces. The build pyramids in vacant lots, put bubbles in fountains, gift-wrap various things around town (statues, hydrants, etc.), and, my favorite, create a message bottle tree where they hang bottles with slips of paper telling people to do something — sing, dance, etc.

However, because of the terror caused by the bombing in Metro City people are pissed about these “art attacks” and the police are out to get P.L.A.I.N. The story kinds of circles around this point. With lots of teenager-y stuff thrown in.

I loved it. I loved every line and page of it.

I loved these two books. They aren’t perfect, sometimes the adults are a little hyperbolic and stereotypical, but even with that it was just damn refreshing to read a graphic novel written by a woman about girls and friendships and art.