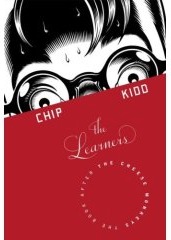 As much as it pains me to say it, I was really disappointed in Chip Kidd’s The Learners, a follow-up to his phenomenal book Cheese Monkeys.

The Learners picks up with Happy, the main character from Cheese Monkeys all graduated from State and trying to get a job at Spear, Rakoff & Ware in New Haven, Connecticut the same ad agency where Happy’s professor and idol Winter Sorbeck got his start. However, the Happy in this new novel doesn’t feel like the same character from the earlier novel. In fact, none of the characters feel real. They’re all drawn with broad strokes, known for a few quirks but never given any real depth.

Himillsy Dodd, the star of Cheese Monkeys, makes an all-too brief appearance, and her scenes are probably the best parts of the book.

The problem here, as I see it, is that Kidd set out to write a book about what he thought would happen to one of the people who took part of Stanley Milgrim’s obedience experiment (you know the one where people give the jolts of electricity to the person who answers some questions incorrectly, effectively electrocuting them) and instead of starting fresh he just used an old character and put him in that situation. It feels lazy.

There are a few tragic events that happen to Happy in the course of the novel and it’s hard to discern where all his feelings of guilt and remorse come from. It’s as though he never gets to deal with one tragedy before the next one happens. It’s a confused, mixed-up jumble of depression that’s really hard to care about.

Plus, there’s all these little lessons on form vs. content, graphic design, typography, etc, that while interesting as hell feel plopped in the middle of the book for no reason that I can discern. Are these Happy’s thoughts on design? Are they from some book he’s reading? I have no idea.

It’s a damn shame, really because Cheese Monkeys was a fabulous, vibrant, clever book (which you should read right now if you haven’t). It deserves a sequel that lives up to it, and The Learners doesn’t.