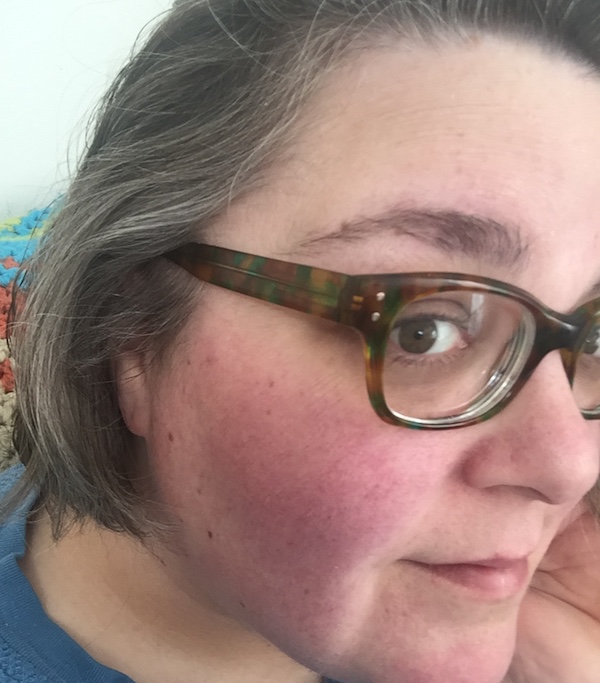 I discovered the hair-color changing properties on Sun-In the summer of 1985 and never looked back. My hair had gone from golden blonde when I was a kid to boring not brown or blonde, a color often dubbed “dirty dishwater,” and I was having none of that nonsense.

I went from Sun-In to good’ ol peroxide within a year and eventually graduated to Nice’N Easy and Loreal and a myriad of other self-hair colorings. When I got a good-paying job I reached the pinnacle of hair coloring. . . salon foils that usually set me back $150+ every six months or so.

For the better part of 30 years my hair has not been its natural color, often it has not even been a color found in nature. I flirted with browns, had a long-time love affair with every shade of red imaginable, went back and forth on pinks, purples, and blues.

Then the greys started to come in. I kept coloring my hair because that’s what I always did and it was never to cover up the grey even though every hair dresser thought it was. I gave up trying to explain that I wasn’t ashamed of the grey, but nobody heard me. It’s almost as though you can color your hair for 30 years because you want to but the minute grey enters into the picture it’s a vain quest to hold onto your youth.

Anyway, I haven’t had my hair professionally colored since June 2015. I’ve dabbled in some semi-permanent manic panics here and there, but for the most part I’ve just been growing out my natural hair color.

I’m oddly enamored with my grey hair and will spend a lot of time looking at it in the mirror, watching how the light reflects off of it. Most of my greys are near my temples and above my ears, clusters on the side of my head that are often hidden by the rest of my hair. This doesn’t stop me from showing off the greys whenever I think I have an audience with someone who will appreciate them. Mostly this means the people in Rock & Roll Bookclub.

A few weeks ago, when I was at dinner with my parents, my dad was talking about a woman in the nursing home with spectacular lavender hair. I said that’s exactly what I was gonna do when all my grey comes in.

“You don’t have a lot of grey,” Mom said over our clubhouse sandwiches.
“Yeah, I do,” I said, flipping up the side of my hair and combing the greys forward with my fingers.
“Oh,” she gasped. “You get that early grey from the Chromeys. Your aunt Rosie was grey at nineteen.”
My dad and I looked at each other and laughed.
“Uh,’ Dad said. “She’s not really a Chromey.”
“That’s right,” Mom said.
“I’m forty-four this is not early!” I said. “This is age-appropriate grey.”
“I didn’t start going grey until I was 56,” she said. “Really, Jod,” she said, at my skeptical this smells like bullshit look. Also, she’s the only person who can call me Jod. “I didn’t go totally grey until after chemo. It just grew back all grey.”

We have very different memories about the history of her hair, but I let her have that one.

So this was the post about my hair. It really had nothing to do with the Random Twitter Asshole who called me ugly because I’m angry about the fascist overthrow of our government by a gameshow host, but they were two events that I wanted to tie together.

fascist overthrow of our government by a gameshow host hair