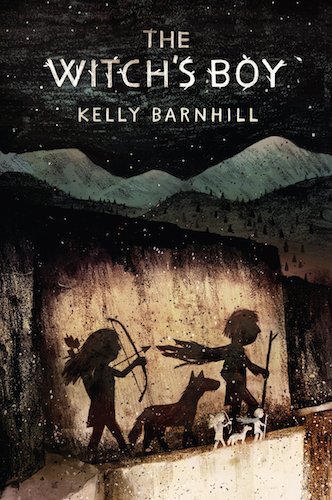 I am riddled with plague. It was bound to happen after loving up on so many people at Midway, plus three hours of sleep, plus the stress and late nights of a new site launch, and add to all that the the emotional upheaval due to Sister #2’s departure to Portland. It’s a wonder I’m still up & breathing and not an oozing mass of ick on the floor.

The real bummer, however, is that I missed the release party for my friend Kelly Barnhill’s wonderful new book The Witch’s Boy. This is a bummer on many levels. One, I would have liked to be there to celebrate this, her third book. A book the Black Sheep had the honor of watching her create (and recreate and create again, thus is Kelly’s process). Two, Kelly is a magical reader and I like to listen to her whenever the opportunity arises.

Earlier this summer the Black Sheep gathered at Kelly’s house to talk about our writing. We were in her backyard that overlooks Minnehaha Creek, a few yards over her son and his merry band of neighborhood kids were having adventures.

The breeze smelled like lilacs as Kurtis handed out orange creamsicles and we sat rapt while Kelly told us a fairytale that was the backstory to another story she had written. That night and her story about the woman who turned herself into a bird to protect her son is one of my favorite memories of this summer.

Kelly is an enchanting storyteller both on paper and in person.

So, can you see why there was so much bumming about missing the party? But lucky for me (and for you), some very kind soul recorded her reading last night and put it on YouTube.