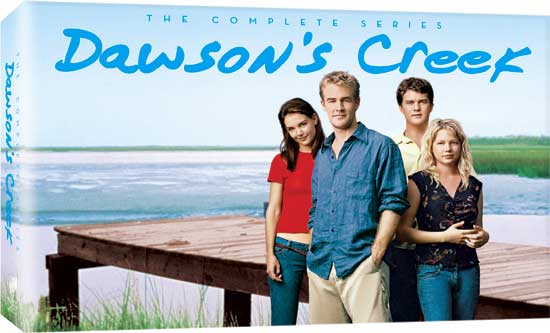 When I set out to re-evaluate my personal artifacts in honor of my FORTIETH! birthday, I had grand dreams of having re-evaluated everything by the time the actual birthday rolled around. Eternal, illogical optimism is often the cause of all my tardiness. I constantly think everything will take entirely less time than it actually does.

The Dawson’s Creek re-watch was going really well for a long time. I’d clip along, a few episodes a week, usually during lunch. But then I got fed up with the shittiness of the DVD series I bought a few years ago, so I quit for awhile until that magical day I discovered the entire series on Netflix. I did pretty well, making it through most of junior year, senior year, and part of freshman year, until Mitch Leery died. I just wasn’t in the mood to sob my eyes out. So I stopped again.

My birthday came and went and I never did get around to finishing the series, until last week when I discovered I was losing my most favorite (and lucrative) client. There’s nothing like emotional and financial upheaval to leave a grown woman craving her favorite visual security blanket.

The Mitch Leery dies episode of Dawson’s always gets me unstuck, at least emotionally. I cry my eyes out until I can’t cry any more. It gets the ick out in a way nothing can, not even listening to Jeff Buckley’s “Lover You Should Have Come Over” in the dark.
[blockquote_styled sign=”Joey Potter”]Get over it. What is the big deal? So I like a teen soap? So what?[/blockquote_styled]

As I type this I’m watching the first part of the series finale, and Jen has just fainted. My heart is giddy and fluttery and I can’t stop grinning even though I know in about 7 minutes I’ll be projectile crying, the tears shooting out of my eyes

I love this show. I don’t know why and I can’t explain it. Is it ridiculous and melodramatic? Yes. Is it inane and unrealistic? Yes. And yet I love it still.

I love this show so much and have watched it so much, that I have many quibbles with the Netflix version. First, they’re fucking up these final episodes, cutting shit out. . . like the first time Dawson & Joey see each other at the gas station, and Joey finding the wedding ring.

Second, the music is all wrong and I’m not talking about how they swapped out theme songs. Trading Paula Cole for Jann Arden. There’s one scene where college-aged Jen plays R.E.M.’s “Nightswimming” for Dawson to remind him of that one time they went skinny-dipping, only on this new and unimproved version it’s not R.E.M., it’s some song I’ve never heard of.

Also, when Jen jumps on the chair to “Baba O’Reilly” in this version it’s some other bullshit song that makes the scene feel awkward.

This, this quibble, more than anything shows how much I love this show. I’m like those crazy StarWars fans who got mad at George Lucas for changing shit in their beloved movie. Dawson’s Creek is my StarWars and if there were weirdo conventions where I could cosplay as Audrey Liddel or Grams, I would totally go every year.

Other thoughts on this show which will continue to serve as the TV-backbone of my personal pop cultural canon:
[arrow2_list]