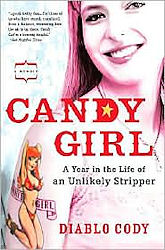 For March, the Rock and Roll Bookclub picked Diablo Cody’s Candy Girl, a memoir about her year as a stripper/professional masturbator/phone sex operator.

You know how when you buy a bag of those little gold-foil wrapped Reese’s Peanut Butter Cups and the first one tastes so good that you eat about thirty-two more right in a row and while it’s all hunky dory while you’re chewing and unwrapping, once you stop your gut aches?

That’s how I feel about Candy Girl. It’s entirely too much of a good thing, ultimately making it a bad thing that pains you. Cody’s book is kind of frustrating, just like her movie, “Juno.” In her writing Cody inundates you with her wit. Both the book and the movie are filled with witty quips the monotony of the wit is only broken by some hipster pop culture reference. It’s hard to find any sort of substance in all that, well, word candy.

One of the blurbs on the back of the book applauded Cody for writing a book without any moral judgment, and while I can groove on that, the whole thing kind of smacked of bullshit. Cody moves from Chicago to Minneapolis to live with her Internet boyfriend and while working as some low-level grunt at an ad agency decides to become a stripper. She spends a year dancing at a few clubs, working as a masturbator at Sex World, and finally as a phone sex operator.

While Cody seems to turn an honest eye to the world of the sex worker, it’s her motivations and her freakishly, unrealistically supportive boyfriend that feel like a big, fat lie. Jonny, the BF, is painted as nothing but a great dad who unconditionally supports his girlfriend’s decision to flaunt her body for cash. While this may be true, it comes off as dishonest. If Cody had even spent a bit of time talking about how freakishly unreal the smooth sailing was I might buy it a little more.

And then there’s the whole reason she cooks up to explain why she, a good girl from a good home, decides to become a stripper and it’s such unmitigated bullshit that I nearly wanted to barf.

I don’t know why I expected some sort of serious reflection or substance to come at the end of the book, but I did. Maybe it’s because Cody is so obviously smart and funny. But just like the Reese’s, you aren’t gonna get anything of any value from Cody’s Candy Girl except a very fleeting bit of amusement.

Someday I’m going to write a romance novel based on “Alabama Pines,” “Cover Me Up,” and “If We Were Vampires” with a dash of “Outfit” for background.

Spotify just shuffled up the 1-2 combo of “God Damn Lonely Love” and “Alabama Pines.” I think Spotify is trying to make cry.