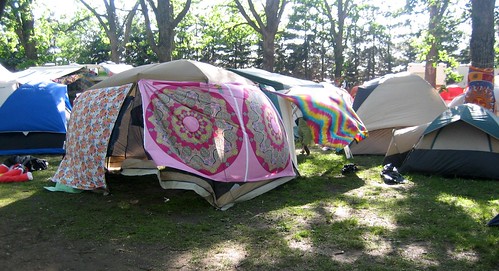 One night at Grumpy’s, Peabo, Jags, Vodo and I were arguing about the number of cats I had. I was telling them I had something like 12 cats. Vodo bought it, because he’s a sucker. Jags argued vehemently that I didn’t have 12 cats and she wasn’t sure if I even had any cats because I never wrote about them on iwilldare.com.

I remember Vodo and I looking at her with equally puzzled expressions.

“Well,” Jags started. “She blogs about the meaningful moments of her life and she’s never written about her cats.”

The conversation then devolved into Vodo calling me a crazy cat lady and me fake crying and telling him how mean that was. But I liked Jags definition of what I write here. It’s stuck with me all these months.

After the weekend I’ve just experienced, her definition of iwilldare.com comes back to me. So many meaningful moments have happened that I don’t know where to start. At one point as Wolfdogg and I sat on a bench in the sunshine, cold beers in hand watching hippies I turned to him and said, “I’m mad because so much is happening and I don’t have anything to write on. What if I forget it all?”

I know I’ve often said, and a lot of writers echo the sentiment, but sometimes things don’t feel like they’ve finished happening until I write about them. Which always brings to mind what the TTHM once said to me about how I report on what’s happening in my life and don’t often wait to reflect on them to see what they mean to me.

I, of course, instantly dismissed his idea. Reflection takes entirely too long.

So where do I begin? I will begin with what’s foremost on my mind.

Last night as we were riding back from Hippiefest, Delilah (Wolfdogg’s 9-year-old daughter) kept randomly singing Mike Doughty’s “Grey Ghost” because it was stuck in her head. We then began to try to quiz each other on the first lines of all of Doughty’s songs. We failed miserably. However, we nailed every single chorus.

So for Delilah, the first lines:
Madeline and Nine: All my life I’ve been slow and senseless
Looking at the World from the Bottom of a Well (I think I got this one): That Cuban girl brought me low
Busting Up a Starbucks: It will always be the end of the time
Circles: When you were languishing in rooms I built to foul you in
Unsingable Name: I want to be your absolute ultimate
Sunken-eyed Girl (She nailed this one): Sunken-eyed girl in the sandwich shop
Grey Ghost: Oh in the great grey ghost that I call home (doh, I can’t believe we didn’t get this one)
Tremendous Brunettes (I got this one): All those tremendous brunettes around
27 Jennifers (I got this one too, but we won’t mention about how I’ve been listening to Mike Doughty and Soul Coughing for longer than she’s been alive): I went to school with 27 Jennifers, 16 Jens, 10 Jennys and then there was her
St. Louise is Listening: I stopped the thought before its drip became insistent

@TGroman It’s almost as though life is an un-ending high school popularity contest.

@TGroman Do you remember like 10 years ago when Klout was a thing? People are fucking idiots. Never forget that.

“If you decide to end your delightful book with your heroine a spinster, no one will but it,” Fuckface editor guy in Little Women.