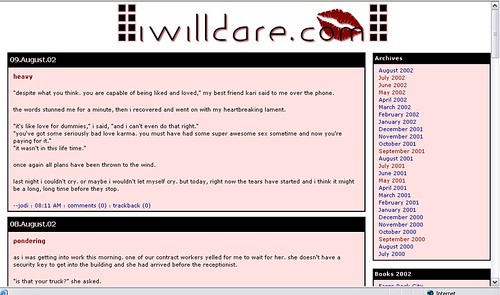 I just did a little bit of googling to see if I couldn’t find anything anything exciting that happened on July 31st. Apparently this is not a very exciting day, probably because it’s too damn hot to do anything. Some of the Historical Happenings that I found included:
1975 Jimmy Hoffa Disappears
2000 Be With You by Enrique Iglesias is #1

But, in my own humble opinion the most exciting thing to happen on this godforsaken day was that iwilldare.com made it’s illustrious debut. To commomorate my 6th Anniversary of being the Internet’s sweetheart I put together a little slide show of past iwilldare.com designs. I warn you some of them are absolutely heinous and will make blood shoot from your eyes.

Six fucking years, can you believe that?

And since it’s somewhat of a tradition:
5808 entries
13,694 comments
And entirely more words than I’ll ever be able to count. But I bet it’s pushing 1 million.

Now, it’s your turn. First time readers and long-timers alike. . . what’s the one question you’ve always wanted to ask me? Now it’s your chance. Leave it in the comments.